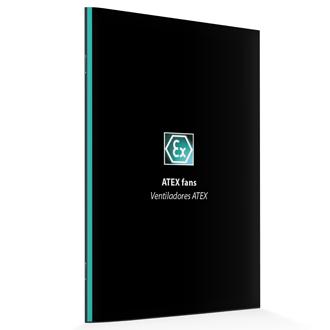 In many industrialized countries, flammable gases are produced or leaked during the manufacture, treatment, transport and storage of flammable substances and are released into the environment.
Flammable dusts are also produced in other industrial processes. In combination with the oxygen in the air, the gases, vapors, dusts and mists produced in these processes, a potentially explosive atmosphere is created that - in case of ignition - causes an explosion. Ignition sources can be caused by an electronic failure derived for example from the switches or by a mechanical failure, such as for example by the friction of an impeller with the inlet frame.
Creation of the explosive atmosphere
An explosive atmosphere is any mixture, under atmospheric conditions caused by the activity of handling or storage, of air and flammable substances in the form of gas, steam or dust in which, after ignition, the unburned mixture spreads. These explosive atmospheres can occur in many of the industrial activities that surround us, such as in the chemical industries, power plants, landfills, metallurgical industries, food industries, etc.
Fans for explosive atmospheres
Casals has a wide catalog of ATEX certified fans in their different modalities:
Its function is to be able to work in explosive atmospheres both in industrial and commercial spaces, transferring air safely.
Discover in this catalog the options of our ATEX range: wall, helical, centrifugal, roof, box, medium and high pressure fans. Furthermore, all our fire fans (400º/2h, 300ºC/2h and 200ºC/2h) are available in their ATEX version.
Contact us to find the most suitable solution for your project.
download PDF

We use our own and third-party cookies to analyze your browsing habits and to be able to offer you our web content according to your interests. Access to our Cookies Policy for more information. If you click “Accept” we take that you have been informed and accept their use. You can also configure them or reject their use clicking HERE

Here you can configure your preferences and choose which cookies you allow to be installed on your device pressing "Accept" or deny their installation pressing "Reject" in each of them: